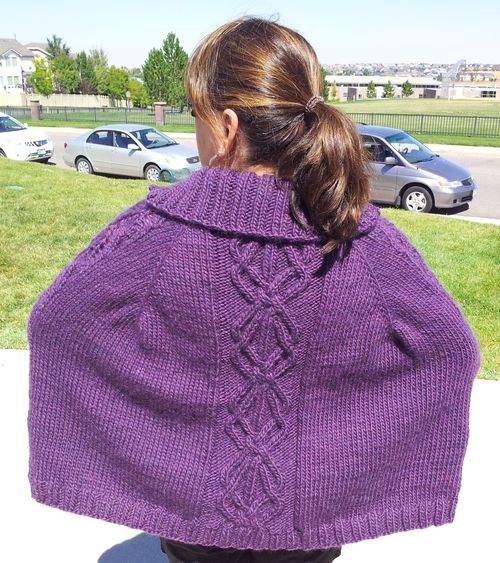 Sheila S. of Aurora, CO knit her version of the #138 Covetable Cabled Cape in Knit Picks Full Circle Bulky. She used the Color Passion, such a vibrant, lovely purple!

"I am so excited.

The pattern was very challenging in terms of having a cable and lace design going at the same time but as usual the pattern is well written and easy to follow.

Thanks, Sheila for sharing your finished project photos!

Fave or Queue this knitting pattern on

See this pattern on SweaterBabe.com.

Here's a lovely, striking version of the popular #123 Sophisticated Boho Lace Eternity Scarf from Amanda S. of Pepin, WI.  It's just gorgeous!!  The color she chose is vibrant and incredibly striking, don't you think? 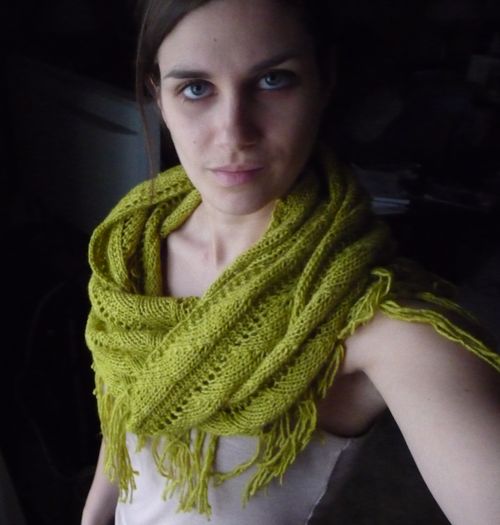 Amanda knit her scarf in Malabrigo Silky Merino (got to get my hands on a hank of that!) in 76 Manzanilla Olive. 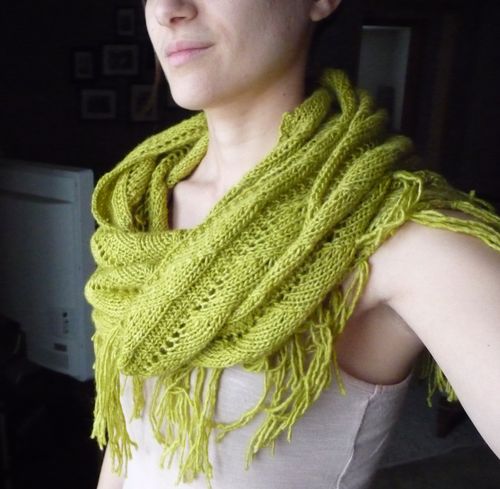 "I love this scarf! The pattern was clearly written and charted and SO easy to follow.  The fringe really makes it "boho" and sophisticated enough to wear in cool weather or warm." -- Amanda S.

Wow to the photos too!  Very inspiring. 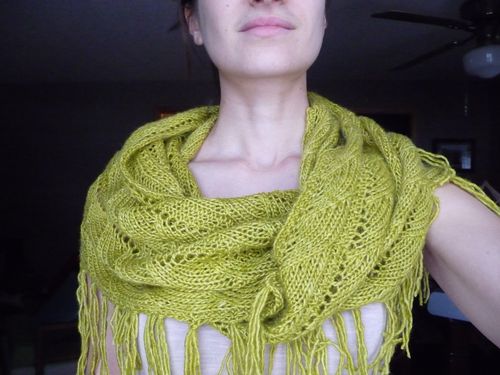 The original was made in Blue Sky Alpacas Alpaca Silk in Blue. 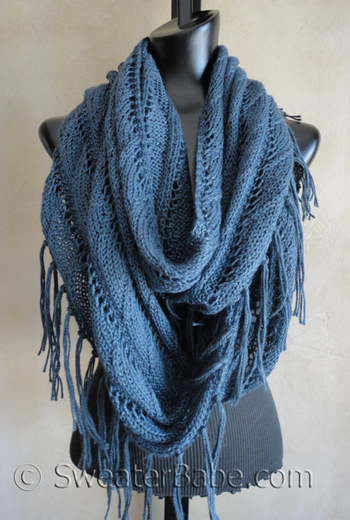 See what a change of color can do to transform a project?!!!

"I recently made this scarf originally to give to my husband because he works outside at his job just about everyday. Well, my boss had neck surgery a few weeks ago & he also works outside pretty much all of the time. I noticed that when he would come in from outside he would always complain that his neck hurt because he was always scrunching his shoulders to keep his neck warm.

I spoke to my husband & he agreed that my boss needed the scarf more than he did, so here is the photo of my boss in his new scarf - which he loves! All of the other men now want scarves, too. But, my husband will get his first! 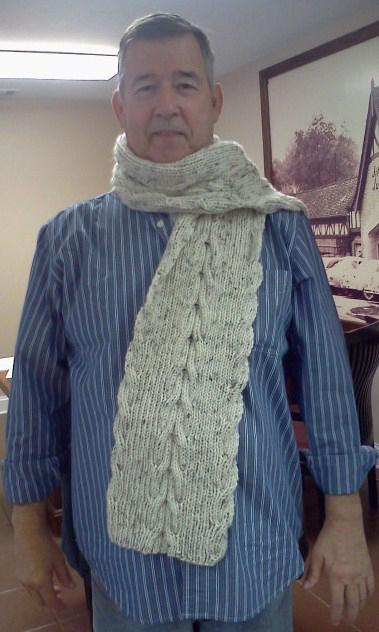 It won't be the Anniversary Scarf (I try never to make the same pattern twice), but I let him choose his own & it's already in the making.

Thank you for a wonderful pattern. Everyone who saw me working on it was in awe over the cables at the edges of the scarf! I really enjoyed making it."  -- Cynthia W., Conyers, GA.

Thanks, Cynthia! That was such a sweet story and so nice of your DH to give up a whole handknit scarf!

"The pattern was very easy to follow. As a matter of fact, much of this scarf was knit while I played bingo - I ALWAYS knit & play bingo at the same time!

I think the main interest point on this pattern was the cable at the beginning & ending of each row. Very unusual & many other knitter's commented the same."

One is the #127 Soft and Chunky Infinity Scarf, shown below in pretty grey tones, and the other is the #103 Luscious Cabled Cowl (available as an individual PDF pattern or as part of an eBook, "5 Best Cowls to Knit Now!"), also in a wonderful multi-colored yarn.

"I recently purchased 2 patterns from your website, I am thrilled with the results of the two shrugs. I live in england and found your site extemely helpful. I am a milliner and my autumn hats coordinate perfectly, thanks." 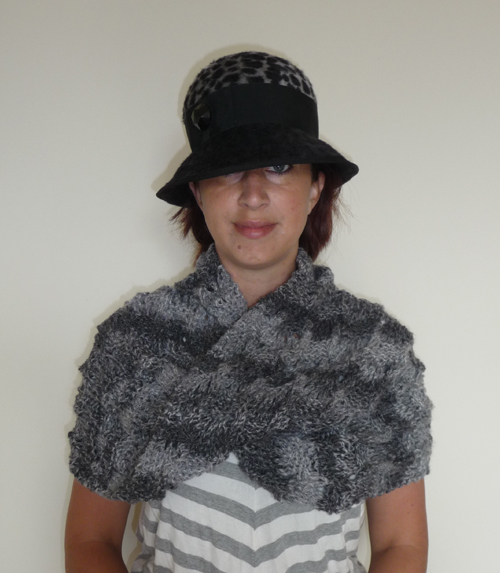 She used Chunky Alpaca.  "[These were] very quick easy to follow patterns which I have used many times with different yarns . . ." 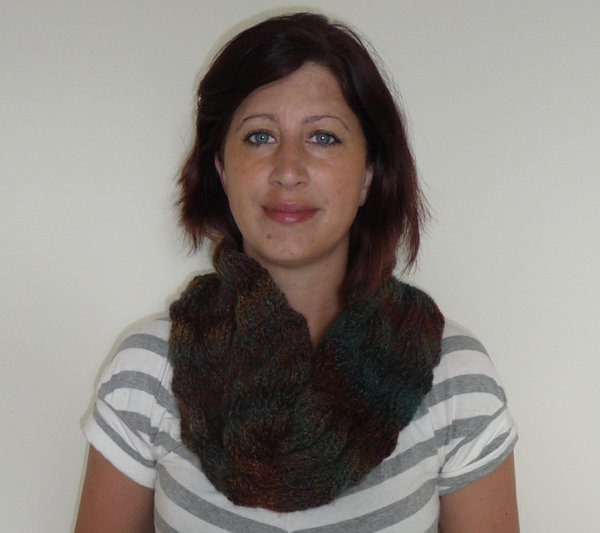 * * Do you have a SweaterBabe.com Pattern photo (on a body!) that you'd like to submit to the photo gallery? * * If we select your photos, you get a free pattern!

It looks great!  Anny says, "This pattern was really fun to knit, easy to understand, and a very cute finished product. I've already worn it several times over a tank top or dress." 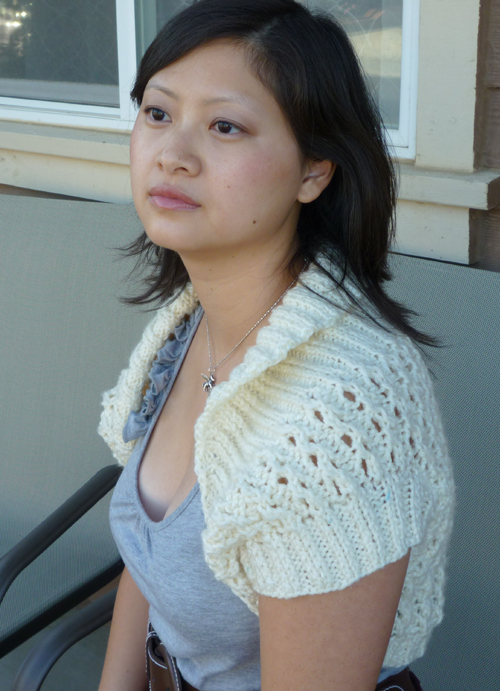 Make one for yourself or a gift! Knit on size 10 3/4 [7mm] needles and seamlessly for quick results! 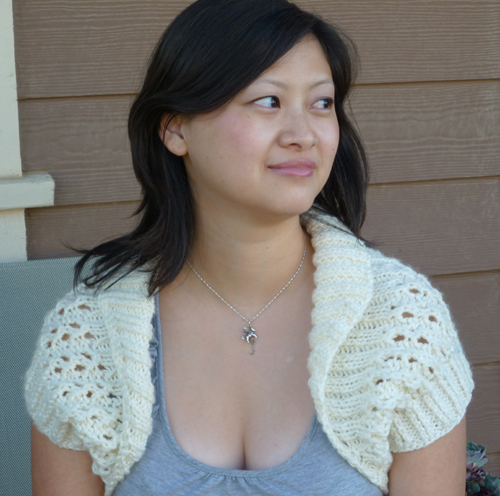 * * Do you have a SweaterBabe.com Pattern photo (on a body!) that you'd like to submit to the photo gallery? * * If we select your photos, you get a free pattern! Read about submitting photos to our Finished Projects Gallery.

Nanatte W. of Sedro-Woolley, WA knit the #115 Romantic Lace Beret for two of her students. Here are her comments:

"These are two of my fourth-grade students for whom I knitted Romantic Lace Berets pattern.  I adapted the pattern to accommodate their smaller head circumference—don’t they look adorable?

I also teach a knitting club at my school for students. I sincerely hope you like the finished product." -- Nanatte W. of Sedro-Woolley WA.

Thanks, Nanatte!  It's so cool that you teach them knitting too!  I would have loved to learn knitting in a class at that age.  Times have changed.

Nanatte used Knit Picks Shine Worsted in Begonia and the teal color.  She thinks those colors have been discontinued, so Serrano and Macaw are the closest in stock colors.

"I loved using this pattern. The finished product looks exactly like I expected! It was rather easy to adapt the pattern to fit my students' smaller head circumferences. At first, I had a challenge with the flower pattern...I didn't think I was interpreting the pattern correctly. After several attempts, I just buckled down and followed the directions, and voila it worked!! Awesome pattern that yields beautiful results. " -- Nanatte W.

A Dramatic Wrap for a Growing Belly

Here is a version of the #112 Dramatic Lace Wrap Cardigan from Kat G. in Clearwater, FL.  To accommodate her advancing pregnancy and the Florida weather, she used a finer yarn and knit a bigger size for great results!

"Hello Sweaterbabe, I really like your patterns, this is my second project from your site. Your patterns are very easy to follow and I love the top down seamless knitting, it makes it so much easier to try it on while working on it and alternate the length of it, which I did on this one for my growing belly :)

I chose the fine yarn so I followed the bigger size pattern, also added some more lace to it...It's perfect for the Florida's winter time! Thank you so much for a great patterns and ideas! Regards, Kat G." 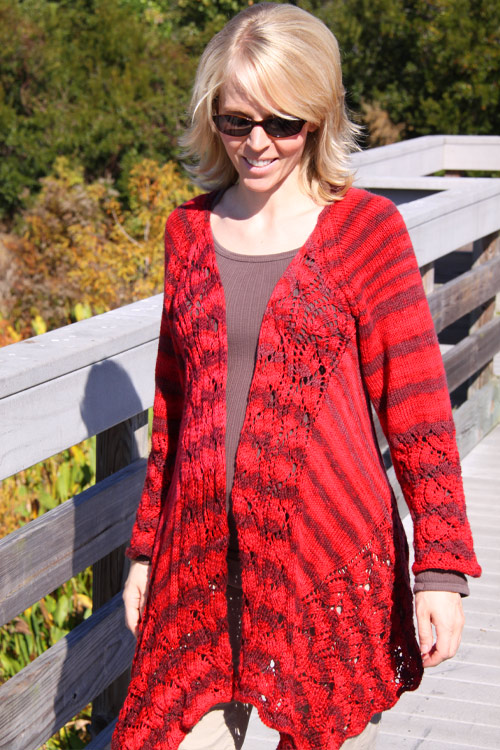 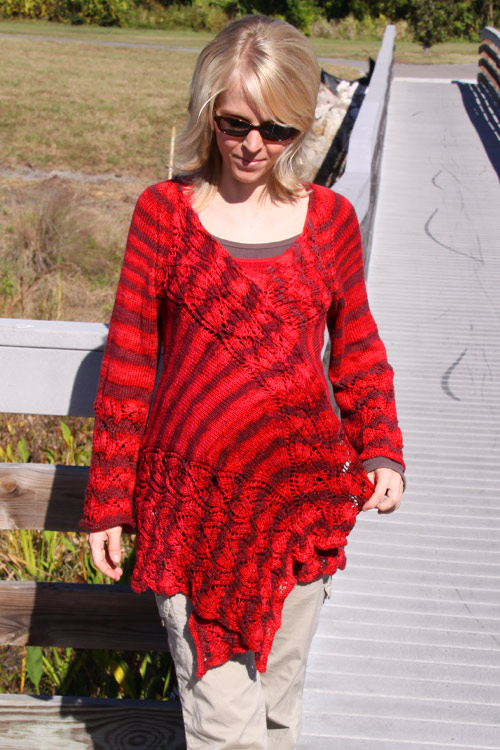 The color variations in the yarn are very pretty!  Like subtle, sophisticated stripes.

Hope you are getting lots of good wear out of this cardigan! 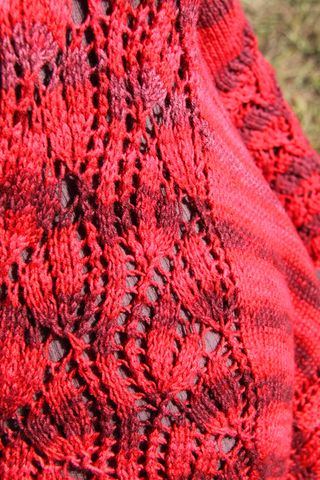 Here is a lovely version of the #94 Cables and Flowers Top-Down Cardigan from knitter Marie V. of Jamestown, NY.  Fabulous job knitting and finishing this, Marie! This design is mostly seamless, but the fancy cabled edging is whipstitched along the bottom curved edge. . .

"Thanks for deciding to use my photos on the Sweaterbabe website! I'm honored. I love your site and recommend it to all the knitters I meet. I tell them you have such creative and fun patterns." 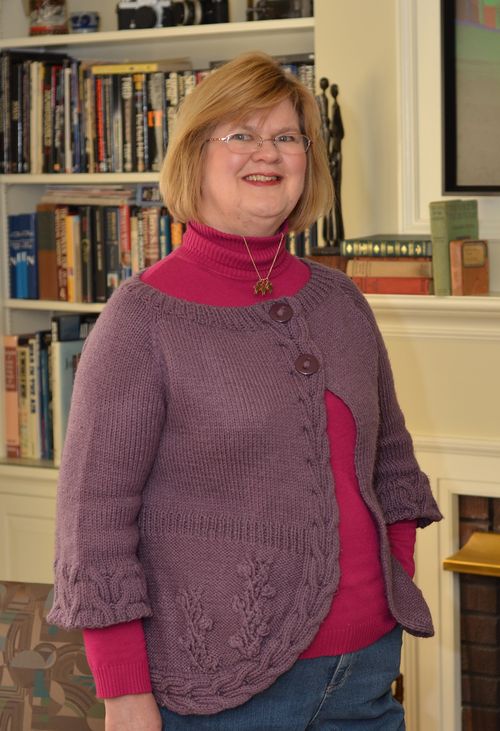 "This was the first time I've made a top-down sweater. It was great fun to watch it materialize before my very eyes! 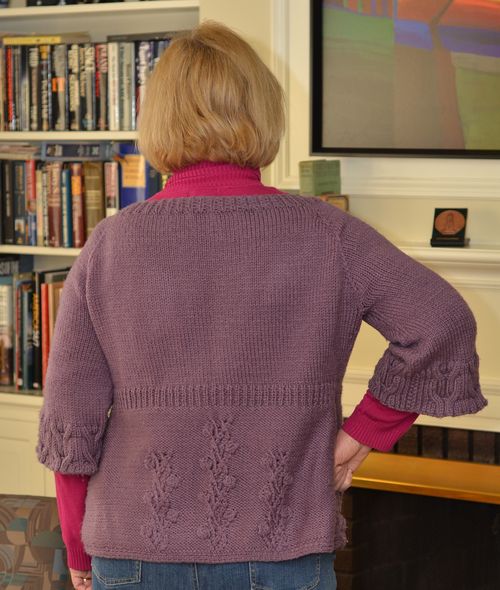 I enjoyed knitting the whole garment at the same time and having fewer seams to sew afterward. I am so pleased with how this sweater turned out.

People are always impressed to find out I knitted it myself! Take a bow, Sweaterbabe! Your patterns are creative, fun and very easy to follow! I'll keep recommending your site to everyone who will listen!"

Thanks so much, Marie!

A Finished Dramatic Lace Wrap Cardigan for a Lucky MIL! 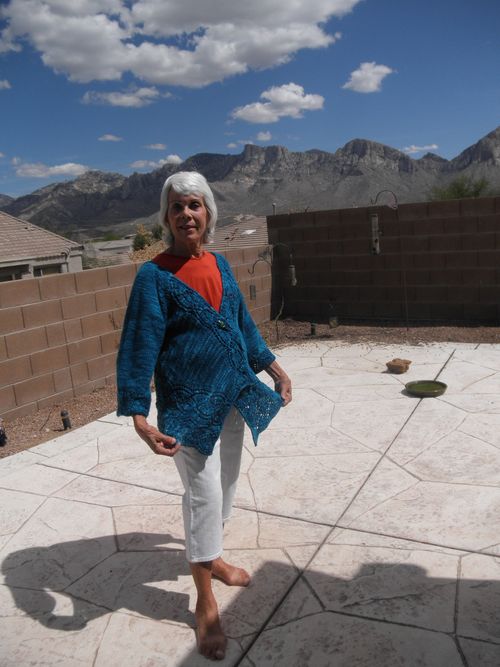 Here, knitter Mindy P. of Lambertville, NJ, knit a gorgeous version in a yarn from Colinette for her MIL, Bev, who proudly models it here.

If you are familiar with Colinette  yarns, you know how stunning their color stories can be!

"Hi and thanks so much for choosing my photos! My mother in law will be thrilled!

I used Isis by Colinette in the color Salty Dog. I loved the pattern, it was great fun to follow and I became obsessed and made it very quickly! I especially love the no sewing aspect! 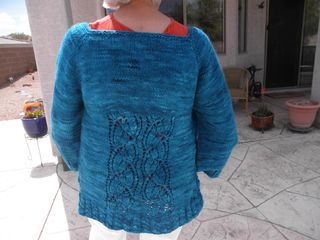 I will be making several more of them, including one for myself!" -- Mindy P.

I wish I had time to make a new one - I would definitely look at using the Colinette yarn.  Gives the cardigan so much depth!  Nice work!

Considering making your first or second of these cardigans? Check out our full GALLERY of Finished Dramatic Lace Wrap Projects for inspiration. . Here is a STUNNING vest from Emily H. of San Jose, CA.

The yarn and the beautiful colorway are a perfect yarn substitution!

﻿"I looked at a bazillion FOs on Ravelry made from this yarn to make sure that the color change was subtle enough that my cables would still stand out.

I've gotten a lot of compliments on it and it is very cozy. The yarn is Louet Bonnie, which is a single ply with a silk thread running through it to make it sturdy.

I really love singles as they always feel squishier and it is lighter compared to other bulky yarns.

I changed my mind about what size I was going to knit after I had cast on and knit several inches of ribbing. I went from co for a M to a S, so in row 22 I repeated the Dec 4 and in row 25 I skipped the increase. This made the transition from ribbing to sweater body smooth instead of tucked in. The pattern was fun and quick with just the right amount of shaping to make me pay attention. I love bulky yarn!" -- Emily H.

Emily used Sunset 04 color for the project. See the #122 Tie-Front Long Cabled Vest knitting pattern and cast on your own version! 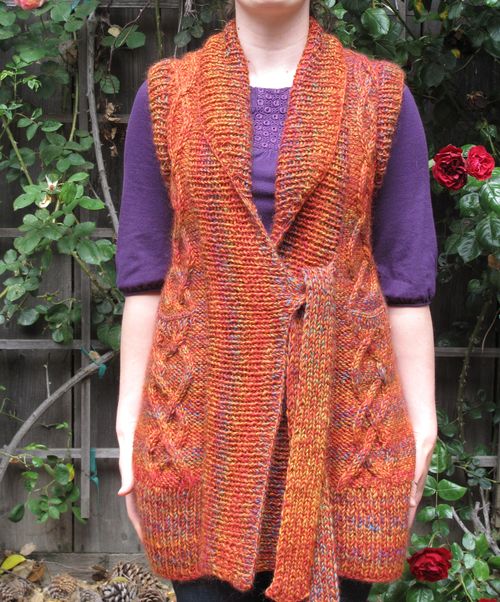 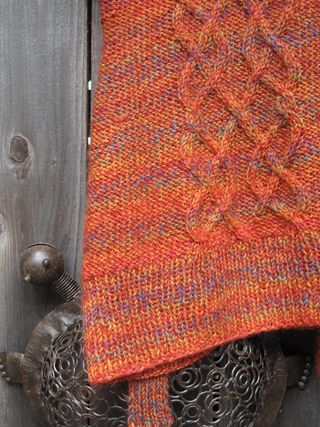 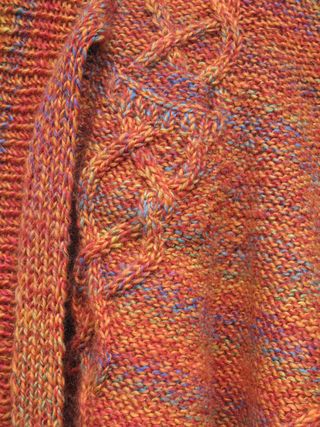 Keep those Finished Project photos coming!
Submit your latest finished SweaterBabe.com project by sending in your best photos of the project on you or the recipient! Photos chosen to be featured earn the contributor a free pattern of their choosing! See details on submitting to our Finished Photos Gallery.